Jonah's been sick the past few days, which means there's been a little too much television. While there's nothing wrong with a show here and there, I'm not a big fan of him sitting in front of the TV for hours on end. He's wanted to sit in my lap quite a bit, so I tried to sneak in a little learning fun on the laptop in between snuggles. 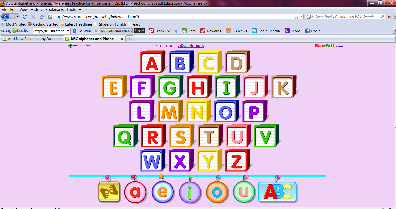 Our favorite website to visit is Starfall. I let Jonah explore the letters of his choice for as long as he was interested. Starfall captured his attention and we made it through the entire alphabet. There is a rhythm to Starfall, and Jonah caught on pretty quickly with repeating the letter sounds...it also probably helped that I was saying the sounds, too. 🙂

Jonah's well on his way to learning the alphabet and letter sounds due to our other regular alphabet activities, but it's always fun to add a little variety into the routine.

Do you use computer activities with your tots? What are your favorites?

I love starfall too! Our other favorite is Jellytelly. Jellytelly is made by the same people who made Veggietales. It's goooood. :D

oo we LOVE starfall over here too! My husband and I both do IT for our jobs (though Im very part-time) Sammy is obsessed with computers and playing games and has some pretty awesome computer skills already. I love starfall's website though because he can do all of the navigation himself. It gives him hints on where to click with the little sparkly letters and arrows! I need to do some surfing and ad a few more sites to our repertoire though!

It has been quite some time since we visited starfall. At the time my little one was a little too young to really be interested in it. We let her watch the Leap Frog videos and she learned her alphabet that way. My Mom recently made my daughter an ABC Bible Verse book that you may be interested in making for Jonah. You can check it out on her blog - http://artisticimagesphotography.blogspot.com/

My little one is only 16 months, but I started letting her look at starfall last month. We only don't about 3 letters at a sitting. It's been a great tool to increase her vocabulary; she likes to repeat and name things at this stage. She's also recently started to make the short 'a' sound and the short 'e' sound in cue with the songs on the bottom of the screenprint you've shown.

I love this site too. We work on it a lot.