Here is a fun little game that Jonah loves to play when we're outside! I've named it "Look and Jump, Letter Stomp". All you need is some space and sidewalk chalk! Cheap & Easy!

I wrote letters J and A in an alternating pattern along the sidewalk. I switched it up every once in a while to make it "hard".  I wrote the kids' names (we were playing with a friend) at the "starting line" and the "finish line". Then they looked for their letter, jumped, and stomped! I also made them say the name of their letter each time they stomped. 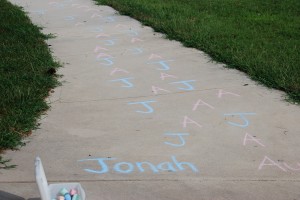 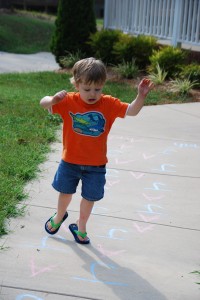 Jonah loves playing this and requests it now. Eventually I will scaffold this activity for him and use the same color of chalk for both letters. This activity can be also be used for other concepts--shapes, numbers, abc order, etc. Really the possibilities are endless!

Great idea! I really like how it is different colors! Can't wait to read more about your alphabet adventures! =)

I love this idea, and I have a couple rowdy boys that would be really in to the stomping part :) Thanks!

I've been trying to come up with some sidewalk chalk games - thanks for the suggestion!

Neat idea! I'll be trying this this week! I saw your comment on Sarah Mae's post about Relevant! I'll see you there :). I'm getting really nervous all of a sudden!