Snow is a precious thing where we live. We get snow, but not very often. Nor does it say very long when it actually does snow. My son was especially excited about our recent snow since it came during the week we were studying snow in science with My Father's World First Grade. I love when things work out like that! At the sight of the first few snowflakes, he took a magnifying glass outside to get a closer look at them just like Snowflake Bentley, the man who photographed snowflakes and studied them for his life's work. 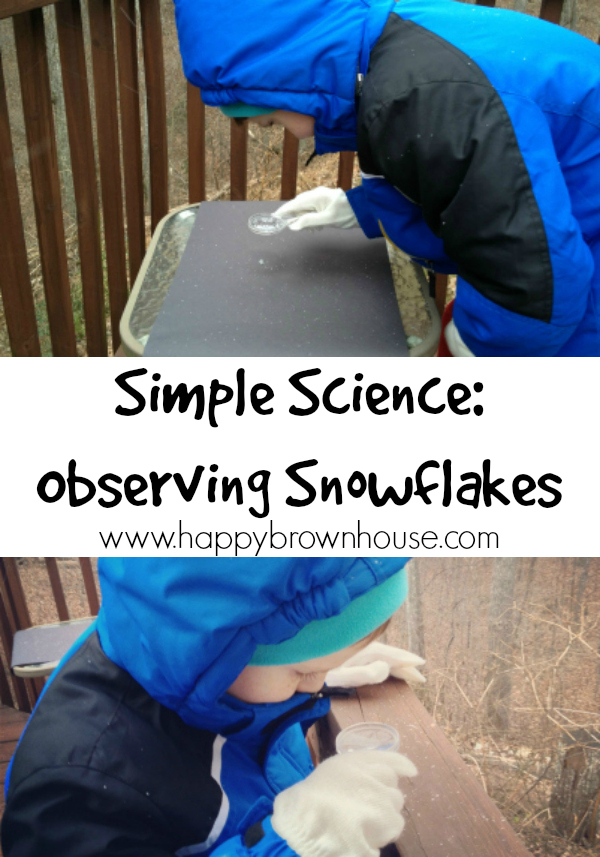 It was adorable, to say the least. We had just picked up a stack of snow books from the library and read through a few, so the timing was perfect. Jonah found that placing a black piece of paper outside to catch the flakes was the easiest way to observe snowflakes. He got this idea from the book, Snowflake Bentley. I just love the way his mind works! 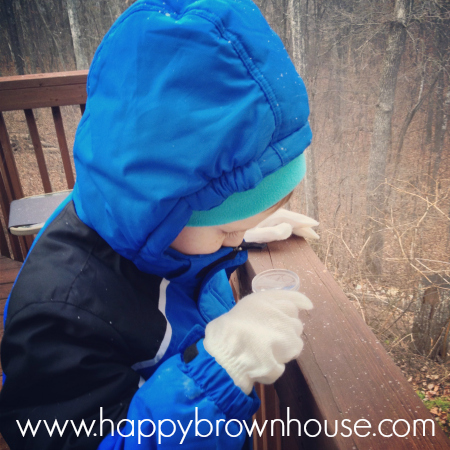 As he studied the snowflakes, he found that each snowflake is different and they are beautiful up close. This was a simple science activity for winter time. This activity would be perfect to round out a winter unit study and reading winter books for kids. When the snow accumulated, we had some indoor snow play with a snow sensory bin. It was the perfect way to play in the snow, but still be warm and comfortable inside. The boys observed the snow melting with this snow sensory bin.

Snow (Sunburst Books) The Snow Globe Family The Mitten Sneezy the Snowman Snow (I Can Read It All By Myself) The Snowy Day Clifford's First Snow Day (Clifford 8x8) Snowflake Bentley The Cool Story Behind Snow (Science of Fun Stuff) The Story of Snow: The Science of Winter's Wonder Snow Dog, Go Dog Marley: Snow Dog Marley (I Can Read Level 2) DLee's Snow Day: The Snow Kids & Curious Cat Story The Reader Thomas' Snowsuit (Munsch for Kids) Minions: Snow Day Snow (Weather Ready-to-Reads) OLIVIA Builds a Snowlady (Olivia TV Tie-in) Snow Day! The Snowman The Snowflake : A Water Cycle Story Pete the Cat: Snow Daze Snow Bugs: A Wintery Pop-up Book (David Carter's Bugs) I Love You Snow Much Over and Under the Snow The Hat Outside Blizzard Little Snow Goose Snow Babies This Place in the Snow Tacky the Penguin Dream Snow When Will It Snow? When Will It Snow? Charley's First Night Snow! Snow! Snow! Freddie Ramos Stomps the Snow (Zapato Power) Mouse and Mole, A Winter Wonderland (A Mouse and Mole Story) Houndsley and Catina and the Quiet Time: Candlewick Sparks First Snow in the Woods: A Photographic Fantasy Little Puppy Lost Dixie and the Best Day Ever (I Can Read Level 1) The Three Snow Bears Snow Bears The Snow Bear In the Snow In the Snow: Who's Been Here? In the Snow Katy and the Big Snow There Was a Cold Lady Who Swallowed Some Snow! Marley: Snow Dog Marley (I Can Read Level 2) Tracks in the Snow Mouse's First Snow (Classic Board Books) Diamond in the Snow Who Grows Up in the Snow?: A Book About Polar Animals and Their Offspring (Who Grows Up Here?) Animals in the Snow Millie in the Snow (Millie's Misadventures) Charlie the Ranch Dog: Charlie's Snow Day (I Can Read Level 1) Samson in the Snow Super Snow Day Seek and Find Bedtime for Little Bears! Holly's Red Boots Carl's Snowy Afternoon Bedtime for Bear Pete the Cat: Snow Daze (My First I Can Read) Winter is for Snow First Snow Robert's Snow Thomas' Snowsuit (Munsch for Kids) Snow Day! Snow Day Dance Willow and the Snow Day Dance The Snow Day Snow Moon Snow Dude Mama, Will it Snow Tonight? Danny's First Snow A Flower in the Snow Snow on Snow on Snow Sam the Snowman If It's Snowy and You Know It, Clap Your Paws! Making a Friend Curious George Builds an Igloo The Little Snowplow Splat the Cat Blow, Snow, Blow Snow Puppy Perfect Snow Hello, Snow! Dinos in the Snow! Snow Day for Mouse (Mouse (Holiday House)) Ladybug Girl Ready for Snow Ladybug Girl and the Big Snow Girl from the Snow Country Lucille's Snowsuit (Lucille the Pig) When This World Was New The Biggest, Best Snowman Snowbots Snowball Fight! Snowed in with Grandmother Silk Snowy, Blowy Winter A Perfect Day Snowflakes Fall Snow Snow Ponies Snow Day! The Snow Lambs Harry And The Snow King (Harry and the Dinosaurs) Cat and mouse in the snow Avalanche Flannel Kisses Lily and Trooper's Winter Brrr! Grandmother Winter There Was a Cold Lady Who Swallowed Some Snow! Snow Happy! Snow Charlie and Lola: Snow is My Favorite and My Best It Feels Like Snow Hooray for Snow! Tiny the Snow Dog When It Starts to Snow (An Owlet Book) Stella, Queen of the Snow (Stella and Sam) The Snow Queen Cleo in the Snow (Cleo the Cat) Kipper's Snowy Day Snowie Rolie Snow Snip, Snip...Snow! Snow Inside the House Snowballs Snowball Millions of Snowflakes Straight to the Pole Best in Snow Before Morning The Very Fairy Princess Sparkles in the Snow Toot & Puddle: Let It Snow Skippyjon Jones Snow What The Snow Bear Snow Bear Snow Angels Sally's Snow Adventure The Snow Blew Inn The Magical Snow Garden Sugar Snow: Adapted from the Little House Books by Laura Ingalls Wilder (My First Little House Picture Books) Footprints in the Snow Curious George in the Snow In the Snow: Who's Been Here? Katy and the Big Snow The Jacket I Wear in the Snow The Story of Snow: The Science of Winter's Wonder Snow Children Snowmen at Night (Storytown Library, Grade K, Story 8) Snowmen at Play Snowmen at Work Five Little Snowmen: A Slide and Count Book (My First) Grandma Drove the Snowplow The Magical Snowman Snowman Magic You Can Do It, Sam Chaucer's First Winter Copy Me, Copycub Rhinos Who Snowboard Six Snowy Sheep