Sometimes, the best dramatic play ideas are inspired by the natural interests and curiosity of each child. For example, while sorting, organizing, and downsizing some of my teaching materials that have been in storage, my oldest spotted some dinosaur skeleton models. He immediately opened them and began the building process. Later, he asked if he could hide the bones in our homemade sand table and pretend to be an archaeologist searching for bones.

My answer? Of course! And our Archeologist Pretend Play activity was born at our house.

(Note: I realize he was using the word "archaeologist" when he should be using the word "paleontologist", since this is a dinosaur skeleton activity shown in this blog post. I've addressed the vocabulary, but we still proceeded to use the dinosaur bones. We are moving on to human artifacts which is what archaeologists study. For the sake of not squashing his excitement, I let him continue to use the term and play with the dinosaur skeleton, but gently reminded him of the correct word.) 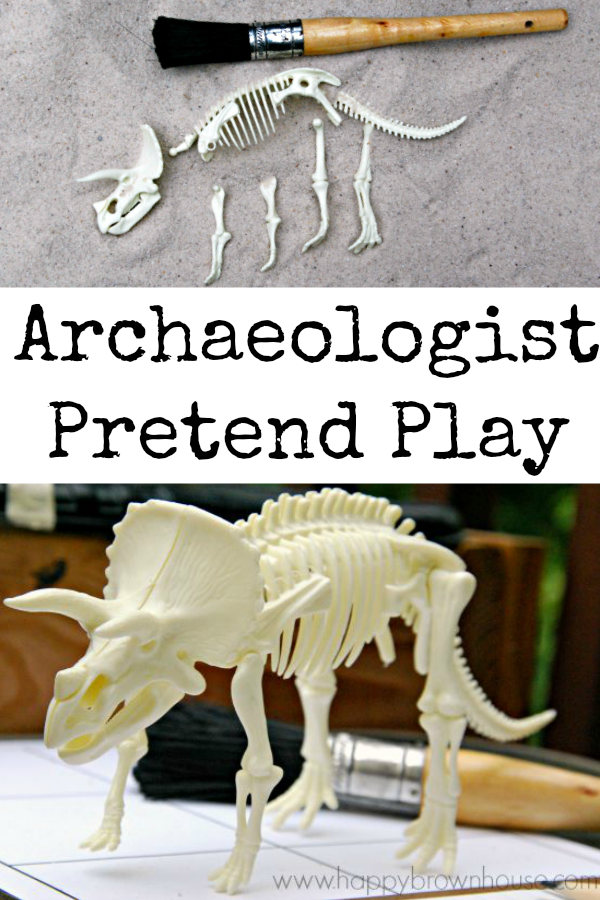 Jonah tends to be the kid that takes an idea and runs with it--making it bigger and better. He told me there was a Magic School Bus episode on Netflix that talked about an archaeologist, so we watched that again for inspiration. After that, he started gathering his materials and putting on khaki shorts--seriously. He was motivated for sure!

After he was dressed, he used masking tape to make a grid on our homemade sand table. I hid the plastic dinosaur bones in the grid squares for him. 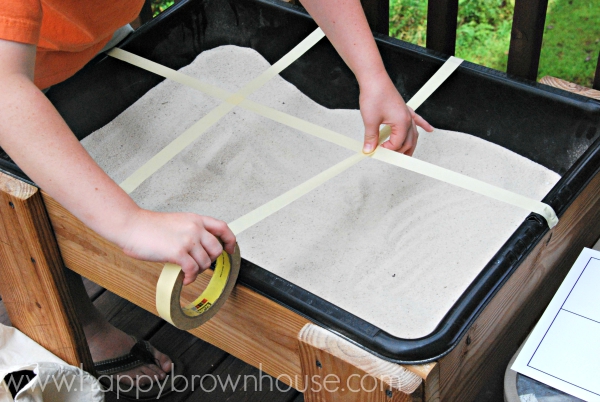 He started clearing away the sand and gently brushing the bones. 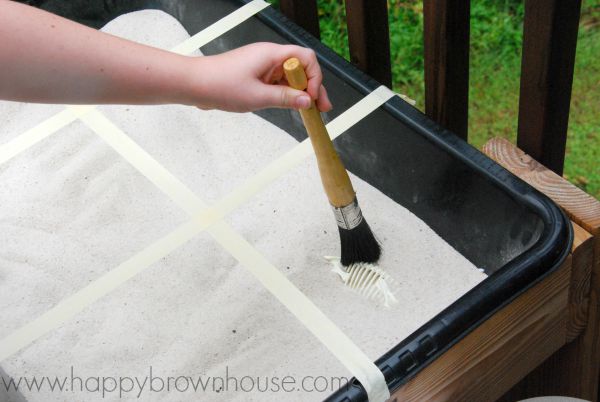 Once he found a piece of the dinosaur skeleton, he placed it on a basic grid sorting mat I had previously made. 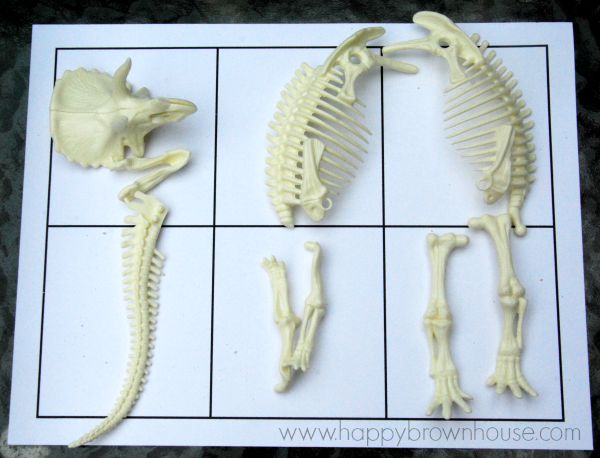 After finding all the dinosaur bones, he had to write the names of the bones on his clipboard archaeology dig log. 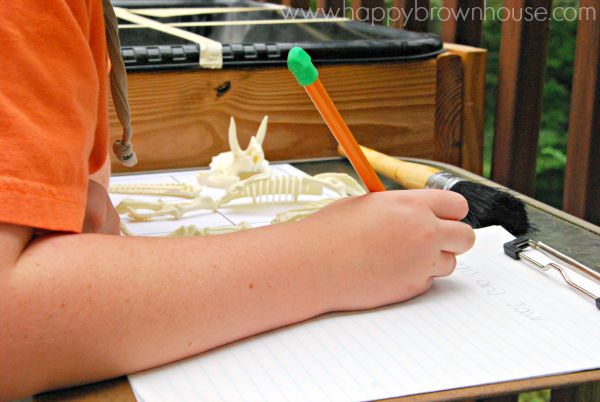 Lastly, he recreated the dinosaur using the bones he found. 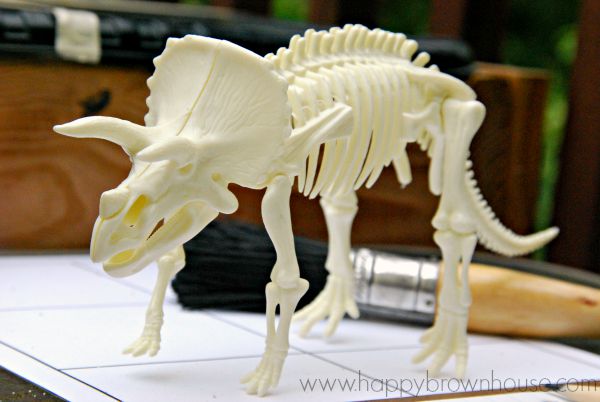 After Jonah had a turn, he hid the bones for Asher. This newly turned four year old used all of the tools, but he was much more interested in the sensory experience of playing archaeologist in the sand table. He did mimic his older brother and placed the bones on the grid. 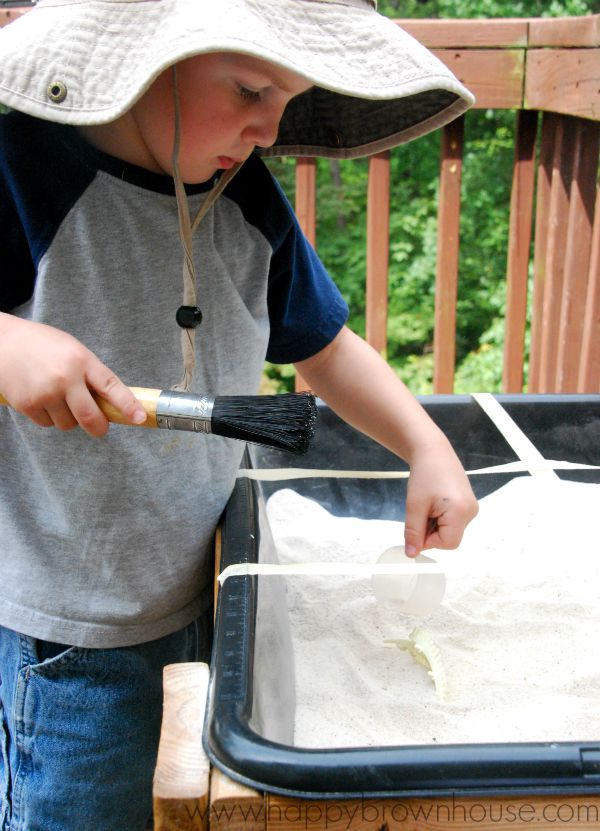 We're going to read some more books about archaeologists and continue to pretend using this archaeologist dramatic play set up, replacing the dinosaur bones with human "artifacts", like broken painted pottery, since digging up dinosaur skeletons is technically a paleontologists job.

This post is a part of our Dramatic Play from A to Z series. Be sure to see the other creative dramatic play ideas for kids in this month long series! 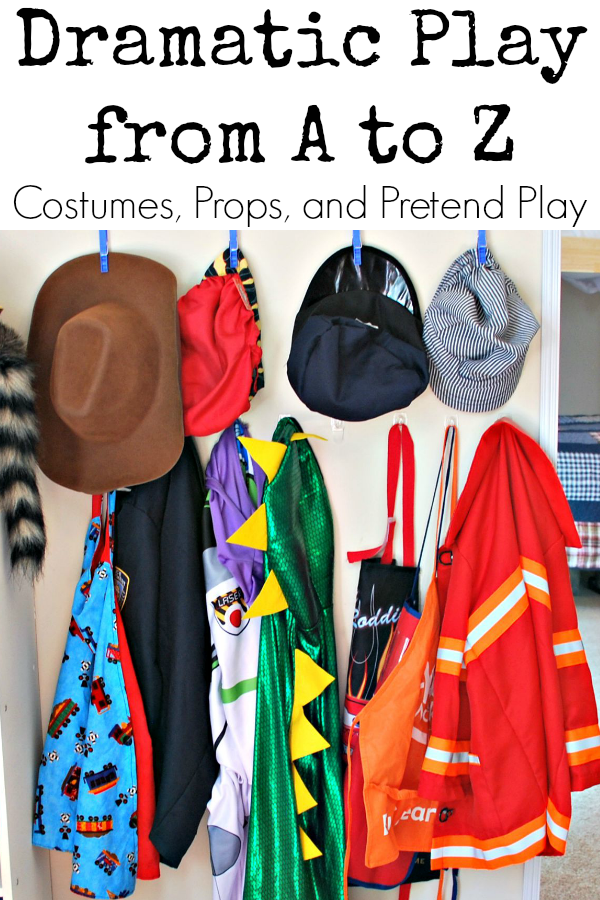 […] Pretend you are an archaeologist digging in the […]

My favorite part of this play experience was to read how Jonah was so excited to play archaeologist that he even changed into khaki shorts! It seems like you have an inquisitive little guy on your hands. Who knows, maybe this will even turn into his chosen career someday!

Thank you Lucy! He was pretty fascinated with it!

Dramatic Play from A to Z | Happy Brown House

[…] is for Archaeologist Pretend Play by Happy Brown […]

Thank you, Phyllis! It was a lot of fun!