As I write this, I'm sitting at Panera immediately after Asher's 9 Month well check. I'm trying to catch a few moments to myself and process after a few hard days emotionally. The latest wave to crash against me? Hearing the pediatrician mention the words "failure to thrive" in reference to Asher. I mean...have you seen this kid?

Is this the face of a child that is failing to thrive? 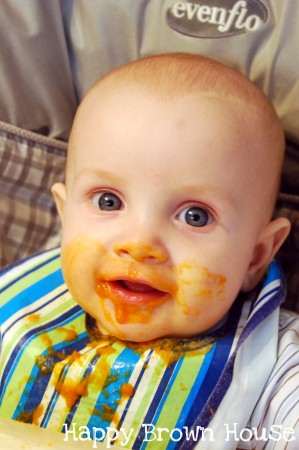 Failure to thrive? Not the face I'm looking into.

I'm just not sure.

You see, I've seen the children that truly aren't thriving. I've seen the empty eyes, the frailness, and the missed milestones. I've seen the orphan child that bangs her head against the crib rails or rocks back and forth to self-soothe when there isn't someone to snuggle when she wakes up in the middle of the night.

Matter of fact,  I have a child that might be rocking in a crib halfway around the world this very second.

No. I just can't accept the term "Failure to Thrive" in reference to Asher.

Failure to thrive? No.

Not when there are 163 million orphans needing a forever family.

[...] Party theme for Asher’s first birthday considering that this was the time in his life when he wouldn’t eat and we were taking him to the GI doctor for tests. Maybe I hoped it would magically make him start eating. I digress. I had been planning this party [...]

[...] any posts? Get posts delivered to your email. Thanks for visiting!We’ve been walking this Failure to Thrive journey for five months now. Let me tell you, it’s not very fun. What started out as shock [...]

[...] of some major food changes happening at our house in the near future due to Asher’s continued Failure to Thrive issues (he has a scope this week), I was so excited to hear about this Healthy Living eBook Bundle [...]

I totally and completely agree with you. My babies did not have rolls either... I did have a friend who was nursing the same time I was, and her milk was about half fat (when she pumped, to be able to see it), and mine was only 1/4 fat or less. So my babies were not chubby like hers were. (Hers have all now slimmed down just fine, and mine are not at all super skinny...just regular.) We didn't have any issues at checkups, fortunately...the public health nurses we visited seemed to be aware that nursing babies do not fit the regular charts. I hope your doctor can learn that soon too!

And I agree with another poster who mentioned about not trying to fatten a baby up by giving him sweet drinks...ugh. I say this out of lots of experience with sugar causing hyperactivity, distractibility, impulsivity, and difficulty task-switching. We have seen much-improved behaviour without sugar excesses. (We keep it to one 10-gram-of-sugar treat/dessert per day now.)

So glad you have a great dose of common sense, and perspective of what failure to thrive really looks like, as well as a great group of friends around you praying. My sister adopted 2 years ago internationally....an emotional but intensely rewarding journey. Bless you!

I just found your blog today via a comment on Joy Prouty's instagram feed. My son Rhys was born Sept. 2 also! And at his 9 month check up the dr. told me he was failure to thrive as well! You had the same exact reaction as me. Rhys is the younger brother to 2 very active sisters. He started eating around 8 1/2 months, mostly table foods. So he was playing with his food a lot at that point. Comparing MY son to other children who are bottle fed and start eating at 4 months is just not fair. He is gaining at a quicker pace now that he has found a love for food! We really need to be supportive of each other as mothers and trust our instincts. I knew my little buddy would be fine and your little guys seems perfect too!