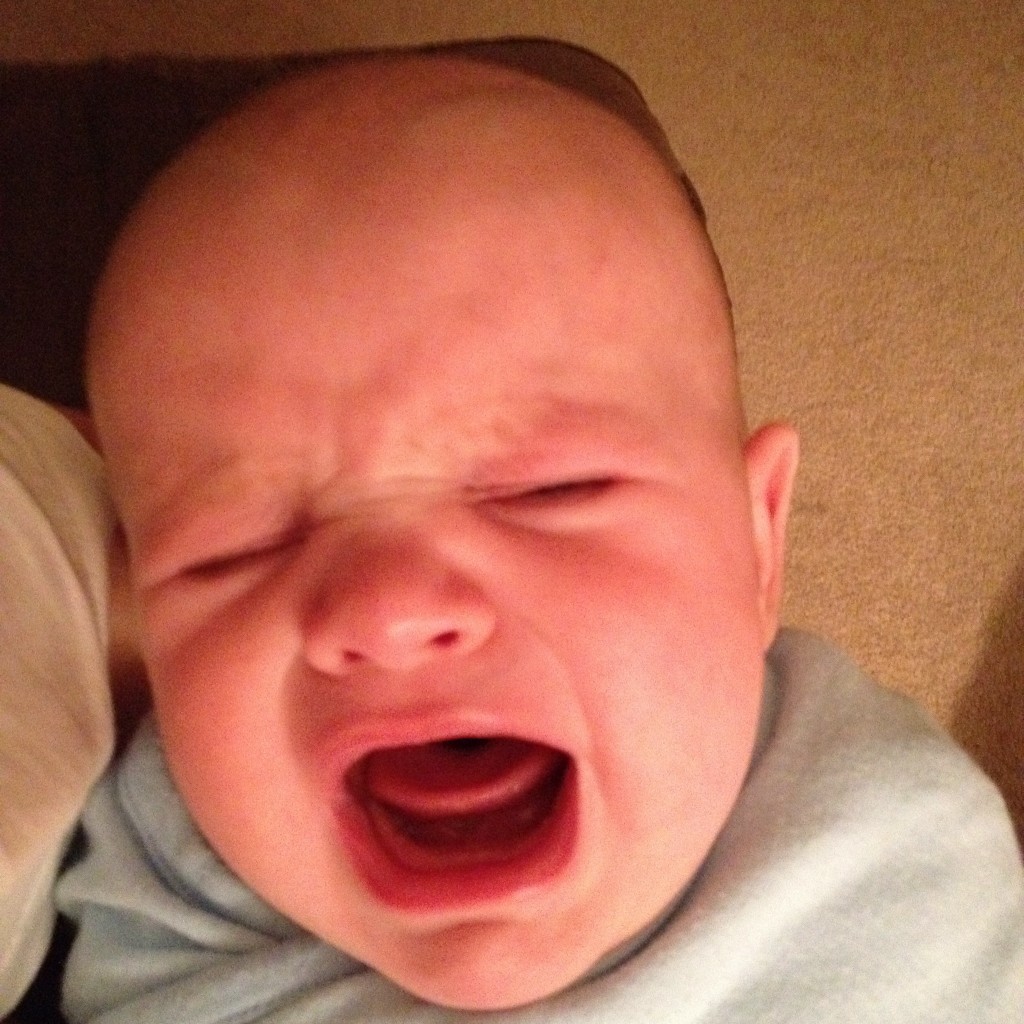 Asher on a very rough night

You know that feeling when you can't get a baby to stop crying, no matter what you try...

Try feeling it for several months straight. It kinda stinks...in the worst way.

It wreaks havoc on your mommy self-esteem. Rips it to shreds and then stomps on it repeatedly. Then, as if that wasn't enough, you start questioning your sanity. Wondering, "Am I really losing it or is that the colic, sleep-deprivation, haven't-had-a-shower-in-two-days thing talking?" It's a very fine line, my friend.

It's been a tough time at our house on the baby front. Sweet little brother, Asher, had colic. I think it's gone, but I don't want to jinx it. Colic is rough stuff. Currently, we're dealing with an extreme aversion to sleep it seems. He fights it like I've never seen before. Then, out of the blue, he decides he really IS tired and screams at the top of his lungs because he's over-tired. Really, over-tired might be an understatement...he's downright exhausted by the end of the day because big brother, Jonah, can't seem to leave him alone.

Mommy: "Yes, Jonah, babies wake up when you shake the bouncy seat and yell at them."

One would think that he'd be sleeping long periods of time at night since he's overtired...one would be wrong. Dead wrong. I can't seem to find the magic equation that results in sleep for him. I think he's most comfortable on his tummy, but that is a recent hypothesis we're still testing.

I used to be such a confident mom, but then Asher arrived and threw my parenting "theories" out the window...followed quickly by our household schedule and routine. It's left me feeling like we're in a tailspin and I just wish the captain of the plane would grab hold of the controls and land us already....Only we're not on a plane, and I'm the adult that is fresh out of ideas on how to steady the horizon.

And so for now, I just keep putting one foot in front of the other, knowing that THIS IS A SEASON. A sleepless season. A season for staying in spit-up covered pajamas. A walk-the-floors-and-bounce-a-fussy-baby season. A season for being selfless for the one that is literally helpless without me. Then one day, I'll wake up surprised and refreshed from a night of uninterrupted sleep. And it will feel oh so good!

In the meantime, I'll embrace the moments that keep me going...

One day, not too far down the road I've been told, I'll turn to my husband and say "You remember how it felt when they needed us?" Yeah, that...

Yeah...that. Oh sweet girl...stopping to pray for you tonight. Today was a day of throw-up for us. And it helped me remember what it was to feel at the end-of-me. Praying you'll find what He has for you in this season and that He'll carry you through, able to catch glimpses like you shared above of the sweetness in the midst of the struggle.

I have heard colic is the worst! I hope he gets past it soon.

Thank you! It is finally getting better. We've really been working on figuring out his cues for when he's sleepy and it is helping.

I feel for you - it has been my experience, in hindsight, that all of the parenting tips for making a baby calm down and sleep work for the sleep-inclined infant, and not at all for the nonsleepers! I had one who literally never slept more than 3 cumulative hours in any 24 hour period for the first four months of her life - and always when I was driving somewhere.

Thank you for your comment, encouragement, and the much-needed laugh! It is a comfort to think that one day this child will most likely be pried out of bed, too.

Oh, dear sweet Sara....tho we haven't met, your writings of this time in your baby's life, makes my stomach ache remembering those days a long.....long time ago. I don't think a mom can forget those feelings! I felt so inadequate, angry, sleep deprived and so wanted her to sleep so I could go about doing what I THOUGHT needed done around the house (I was not married a year yet at that time!). Lots and lots of tears. Thank goodness for a wonderful helpmate and just time....wonderful time that passes so slowly but then finally, they sleep and we do too! Sending hugs and comfort.

Thank you Pat! It's wonderful to know that I'm not alone and that "this too shall pass." He really is a wonderful little guy when he's happy.

Yes sweet friend it is but a season! Just keep putting one foot in front of the other and repeating in my weakness He is strong!